More information can be found in the tech panel, very useful also for debugging the problem.

To solve this issue you have to first locate the sensors on the machine and then clean or replace them.

Note: on recent models the cross-scan axis optical sensors have been replaced with maintenance-free magnetic sensors

There is no need to detach the sensors from the machine to try to clean them. You can first tray to remove the dirt with a small brush or compressed air.
This works in most cases but remember to be gentle or you can damage them.

If the problem persists you can try to clean them with a soft swab dipped in Wiping fluid or a generic degreaser and remember to let them dry well before usage.

Note: we strongly suggest to clean gently the cross-scann sensors monthly to prevent this errors and other random glitches. 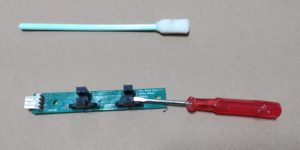 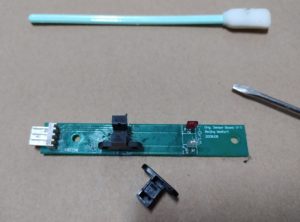 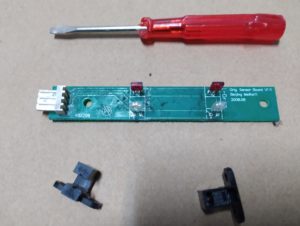 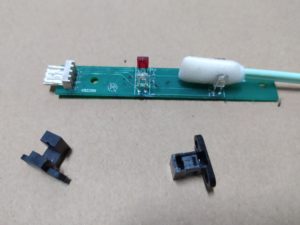 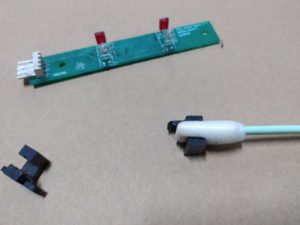 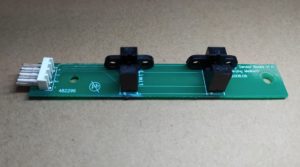 If the gentle cleaning is not enough you can detach the sensors cable, unscrew the two screws and remove the sensor board from the machine for a deeper cleaning.
On the sensors board there are two optical sensors. The sensor is composed by a red emitter and white receiver boxed in a black plastic enclosure.
With the help of a flat-head screwdriver you can gently try to remove the plastic enclosure and then you can deeper clean the sensors and the enclosure.
When finished put back the enclosure an mount back the board on the machine.

Replacing a defective sensor board

If you are not able to recover the sensors by gentle or deep-cleaning them, then you have to replace the sensors board.
The Kornit original part number is “06-EBRD-0002 Origin + Limit Sensor Assembled PCB” and the price is around 30 €.

Replacing only the sensors

The board is really simple: a connector, the pcb board itself with only few paths and 2 photoelectric sensors model TP806.
The only thing that can break on this board is one of the sensors. You can buy them for 1$ each in a good electronic store or even on Aliexpress